What better way to kick off discussion of a book documenting the rise and rise of illegal music downloading than with a confession.

From the age of eleven, I openly flirted with what might reasonably be termed, at least in the context of what’s about to be talked about here, low-grade criminality.

See, for at least a good decade, I was pretty handy at and was quite frankly an open practitioner of, the home music-taping craze that began sometime around the late seventies and continued on right throughout the 1980’s.

I remember it well.

Every night after dinner I’d be ensconced in my bedroom, seated at my flourescent lamp-lit wooden study desk with one eye on my ‘social studies’ homework while two lightning fast trigger fingers were poised at the ready hovering like the tallons of a ravenous eagle over the plastic ‘Play‘ and ‘Record’ buttons of a cutting edge piece of tech known back then as a radio cassette recorder (with a duel-head tape deck – I can still talk 80’s when I need to!).

Junior criminal mastermind that I was, I’d have my ear cocked like a soldier on midnight sentry duty listening for the opening notes of any of my favourite songs. When one started playing, I’d spring into action literally at the speed of sound and slam down those two next-to-each-other plastic buttons on the cassette recorder faster than you could say “Video Killed the Radio Star” and whamo, the net was dropped on another Top 40 piece of free ‘tune loot’ I’d most likely had in my aural crosshairs for days, maybe weeks.

I made countless mix tapes by this means and in doing so denied the recording industry of the time, of what, over the years, would have amounted to thousands of dollars of income had I chosen to buy this music on cassette, vinyl record or later CD at the bricks ‘n mortar music stores you don’t see around anymore.

And like flared jeans, Kodak ‘Brownie’ cameras and Radio Station 4IP (later briefly Radio 10) that all seems so long ago, some days I wonder if maybe I imagined the whole thing.

Fast forward twenty-five years to the early 2000’s and courtesy of the advent of the internet coupled with file-sharing and streaming technologies not to mention the birth of the MP3, and the plundering of an entire multi-billion dollar industry was now happening on an unprecedented industrial scale.

While four decades ago, I and armies of adolescents like me, armed with $50 radio cassette recorders and enough patience and spare time, could eventually gather together a handpicked collection of songs without paying for them simply by waiting around for hours on end for the right Top 40 hit to come on the radio at a randomly selected moment chosen by the radio station, by the early years of the 21st century with the digitized assistance of such major league behemoths of the ‘ripping’ scene as Napstar and BitTorrent, stealing music had become an infinitely easier and far more abundantly rewarding past time than previous generations could ever have imagined possible.

Millions of songs along with the entire albums from which these tunes were birthed were now available for free 24 hours a day at the click of a mouse.

How exactly the music industry of this time was brought to its knees quite to this extent is the subject of the book HOW MUSIC GOT FREE, written by U.S author Stephen Witt. Stated simply, this is one of the most unputdownable books I’ve read in recent years, which, in a great many of its chapters, is written more in the style of a Tom Clancy hi-tech espionage thriller than a modern history account.

In my next post I’ll attempt to lay bare some of the advances in music compression technology that gave birth to the MP3 revolution and unleashed pure chaos on an industry that was transformed forever, and today, in terms of earned revenue, resembles nothing but an emaciated shadow of its former self.

Ps. Recently I mentioned a newly released short story collection by Hollywood A-lister Tom Hanks called UNCOMMON TYPE. The book features 17 stories that all revolve around, to varing degrees, typewriters. Apparently Hanks is a vintage typewriter collector. With that in mind it’s understandable he (and a company called Hitcents.com) have released a free app for iPhones and iPads that reproduces the sound and feel of typing on an old manual typewriter (including the ‘bing’ sound when you reach the end of a line plus the manual carriage return audio fx). If you have a nostalgic hankering to return to a part of your pre-digital life, check out the app HANX WRITER.

Pss. It may have taken 174 years but someone’s finally written a sequel to Charles Dickens‘ novella A CHRISTMAS CAROL (published in 1843). It’s called TINY TIM AND THE GHOST OF EBENEZER SCROOGE. 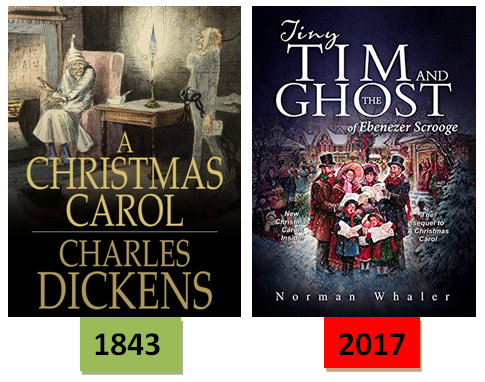 Psss. Speaking of Charles Dickens, there’s a new movie out based on “the inspiring true story” of how he wrote A Christmas Carol. It’s called THE MAN WHO INVENTED CHRISTMAS and stars Christopher Plummer.

12 thoughts on “How Music Got Free”