Does anyone remember MAD MAGAZINE?

It’s been around since 1952 and I used to read it (and love it) as a kid growing up in the late 70’s. If memory serves me correctly, it stopped being funny sometime around the mid eighties (coincidentally when I had outgrown my teens) when they started putting out an Australian Edition.

It’s satirical comic rivals CRAZY (1973 – 1983) and CRACKED (1958 – 2007) may have long departed this planet but MAD carries on. At its peak in the mid seventies MAD boasted sales of 2.1 million copies per issue and carried on selling in excess of one million copies per issue well into the eighties. These days sales top out at 100 000 copies. Like so many print magazines, the free-to-read recesses of the internet have opened up a plethora of competing humour outlets that the magazine did not formerly have to contend with, resulting in barely sustainable readership numbers.

I picked up the April 2017 issue the other day at my local library and guess what? It’s funny again! The television and movie parodies are still there as well as old favourites like ‘The Lighter side of..’ and Spy vs Spy. The back cover still doubles as the mighty ‘Mad Fold-In’ and the freckled features of ageless Alfred E. Neuman endure.

For those of you who’ve always suspected I may be harbouring some kind of epi-pen sized dose of madness, look no further for your proof.

PS. Take a closer look at the Mad front cover pictured at the top. The words where Alfred        E. Neuman’s mouth should be, read –

“Believe us – we really, really wish there was no…”

I had a car accident.

Or put more accurately, a car accident almost had me.

The graphic above shows what happened apart from one detail: we were tail-ended by a truck. A very, very big truck.

I was in ‘pole position’ (meaning first in line), sitting stationary at a red set of traffic lights. For approximately 15 seconds prior to the accident, a large Isuzu truck had been in line behind me, also waiting for the light to change. As truck drivers seem fond of doing, this oversized vehicle was resting so close behind me I could practically feel the drivers breath on the back of my neck as I sat waiting for the light to change. Suddenly, with the lights still red, I felt and heard an almighty crash-bang impact to our car from behind.

The hit from behind felt more like we’d been the target of a shoulder-fired RPG (rocket-propelled grenade). For an instant, it felt like our car was in the grip of a magnitude 9.5 earthquake. The back windscreen instantly shattered into tens of thousands of tiny shards of plastisized glass and the explosive noise of that was one of, if not the loudest, sounds I’ve ever heard in my life.

And all because, in an ill-timed moment of relaxation, the truck driver behind me let his foot ease off/slip off the clutch. Well, that’s my theory anyway, and according to a number of people I’ve spoken to since, that is the only logical explanation for what happened. Because, important to note, the traffic light was most assuredly still red when the wallop happened. Thankfully I also have the name and address of a male witness who stopped at the scene who’s prepared to vouch for that if the need arises.

Did I mention that my seven-year old daughter, still dressed in her pyjamas, was in the  back seat at the time? Safe to say, she took a lot more of the impact than I did. Don’t think I’ll ever forget the look on the truckie’s face after he’d approached my driver’s side window to exchange details and saw her perched smiling in the backseat with a slightly perplexed though calm look on her face gazing up at him. Both my daughter and I sustained no injuries but my wife and I have since taken our daughter to the doctor for a precautionary checkup and been given the all clear.

Mercifully the insurance claim process (we’re with the company with the two joined pronouns for a name plus the slogan “We get you”) has been pretty painless to this point. Although we do have to wait 17 days until our car can be fitted into the insurance company’s preferred repairers’ overtasked schedule for a new back windscreen fit.

That means we faced the prospect of driving around for the next fortnight and more, sans rear window. That was until my wife came up with what I think to be a rather novel and cost-effective solution to our missing back window problem. At her prompting, I have now affixed, with water-proof taping, two study-desk plastic place mats we just happened to have lying around at home to the gaping space. They’re see-through and now secured in place with the tape to serve as our temporary back windscreen. From a distance you can’t even notice anything is different.

Necessity (and penny-pinching DIY)  is the mother of invention.

Desk-bound no more. Our new (temporary) back window panel. 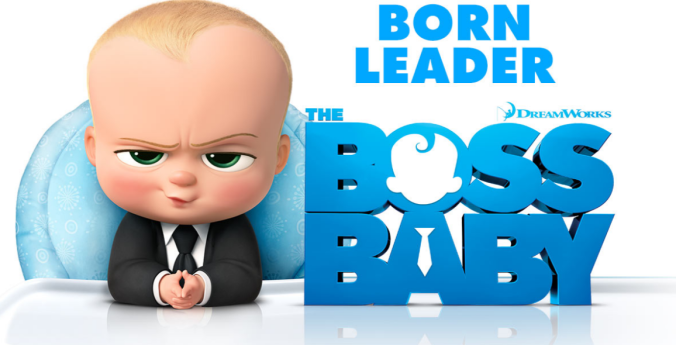 I came out of the movie BOSS BABY feeling happy, refreshed and like a brand new person.

Because I slept through most of it.

I waited until the set up was complete and Alec Baldwin gets to say his classic line “Cookies are for closers” (referencing his memorable performance in the 1992 Al Pacino movie Glengarry Glen Ross) and then I was out like the proverbial house lights. In truth, it wasn’t even completely the movie’s fault. Those cinema seats are so damn comfortable!

Conspiring also to bring about this comatose state (if it had of occurred during the new POWER RANGERS movie – like BOSS BABY also currently labouring under the weight of  poor to scathing reviews – I could have at least enjoyed the jounce of calling it a ‘power nap’) was the fact I maintain I was also purposefully lulled into a state of droopy eyelids prior to the movie even beginning.

The before-show included all of nineteen ads. That’s 19! (as in the average age of the combat soldier during the Vietnam war). What’s even more amazing than that figure is the fact that I bothered to count them. Who does that right? Well, it seems I’ve become one person who does, especially when I wasn’t looking forward to the main feature in the first place. Actually the ad count exercise commenced from what I estimated was number 10. I totalled at the end. And that’s not even mentioning the four full length ‘coming soon’ movie trailers plus the reminder to turn mobile phones off.

Still, my seven-year old daughter enjoyed it and I got to see the best trailer I’ve ever had the privilege of watching for a kids film – CARS 3 (Pixar’s 18th animated feature film). Then again, come to think of it, the trailer for BOSS BABY looked pretty enticing as well.

Next time I venture out to a juniors movie it had better be to see a sure-fire hit.

Will somebody please bring on FROZEN 2! 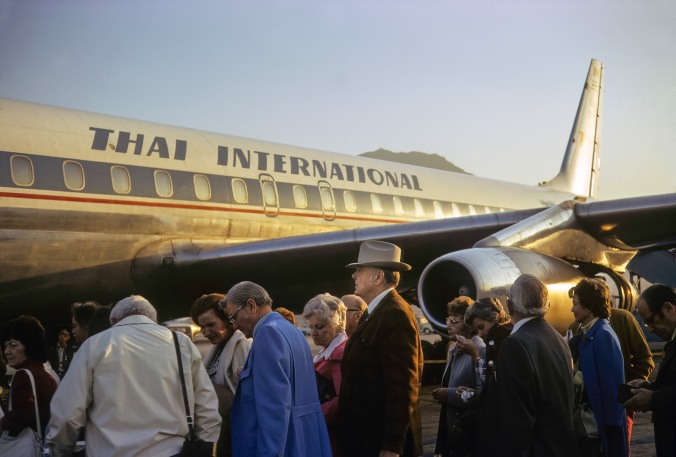 Can you guess what year this picture was taken?

It was the same year U.S President Richard Nixon resigned from office and more locally that floods devastated Brisbane. 1974 was a time back when people still ‘dressed up’ to travel aboard commercial aircraft and international travel wasn’t yet the $2 store commodity for the masses it is today.

My most recent time on a major airlines flight was towards the end of last year. I was seated next to an individual who I guessed to be in their very early thirties. This person was kitted out in thongs, draw-string boardies and a sweat-stained, faded Metallica singlet. Face stubble the colour of cigarette ash and  a full sleeve of owlskull tattoos (with a Mickey and Minnie Mouse feature inset thrown in for added quirk) completed the picture. I can’t be certain but I think I also spotted fragments of a tree leaf caught up in his nest-of-black-mambas dreadlocks. Would it be unkind to remark there’s a reason they call it cattle class?

Contrast that to the picture above and its no wonder some airlines have now introduced what in the industry is known unofficially as ‘economy minus’ class for flight passengers. 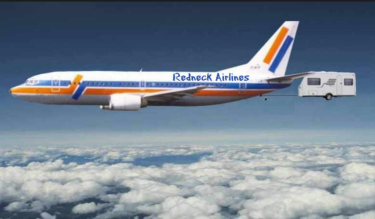 PS.     This all comes in the wake of last weeks’ United Airlines dress code furor where three teenage girls (all travelling for free courtesy of the Airline’s employee friends and   family rule) on a flight from Colorado to Minnesota were asked to remove leggings.

PSSS.   Joking about the leggings.