With the High Court-approved postal vote to gauge public support for legalizing same-sex marriage in Australia set to go ahead next Tuesday on September 12th (people will have until November 7th to return it), now is probably as good a time as any to take a look at some of the more creative public protests that have led to laws being amended and decisions being overturned.

Back in May, American ice-cream chain Ben and Jerry’s, who operate 26 stores in Australia, instituted a rule that banned customers from ordering two scoops of the same flavour ice-cream as a form of protest against the government’s refusal to recognise the legality of same-sex marriages.

In 2012 the company renamed one of its flavours “Apple-y Ever After” and put two grooms on its packaging. Then in 2015 when the US Supreme Court ruled gay marriage constitutional, Ben & Jerry’s renamed a flavour “I Dough, I Dough”.

Regrettably, a great many public protests succeed in nothing more than letting everyone know, usually via a static-ky megaphone, how angry a certain group of people are about a particular issue. Mismanaged, violent protests don’t really capture the hearts and minds of people but more often than not simply leave those protesting looking like a bunch of single-cause, self-centred extremists who don’t have to turn up to work the next day. But throw in a pinch of creativity and a few peaceful gestures that haven’t been seen before, and the chance to connect with people on a far more meaningful level and really spotlight an issue suddenly becomes a real possibility.

As the pictures below prove, Ben and Jerry’s aren’t the only ones capable of blue-sky thinking (as opposed to ‘in the box’ thinking) when it comes to putting their point across in the name of attention-grabbing social activism.

2014 – Italian factory workers let their hats do the protesting. 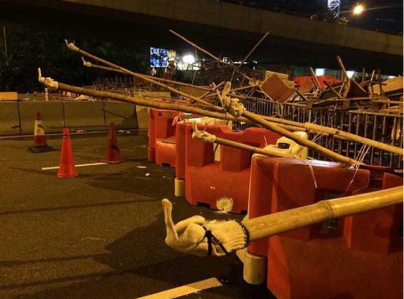 2013 – Brazilians protest against FIFA’s World Cup with soccer balls on a beach meant to represent a cemetery. The banner in the background reads  –  “We need schools, hospitals and public security as high a quality as FIFA’S World Cup stadiums”.

2012 – Brussels dairy farmers used a milk cannon against police in their protest against plummeting milk prices.

As I’m quite certain you’ll agree, living in a democracy is rarely dull. Indeed it often comes with solid gold entertaining moments as a bonus.

Ps. Click here if you’re up for this week’s bonus read

PPs. And just lastly from the newsdesk… that celebrated idea thunderdome they call The Brisbane Writer’s Festival (now in it’s 55th year) continues until this Sunday.