I truly feel like my ship – alright, under the circumstances, better make that royal yacht – has come in.

A letter from the Queen will do that to you.

Then again, once you’ve had one letter from Her Royal Highness the others after that tend to be a bit ‘meh’. Right?

Like popping bubble wrap or running your fingers through your hair after getting a haircut or even opening your eyes in the morning and realizing it’s Saturday, some things never lose their appeal.

Last time I received a letter from Queen Elizabeth II (HERE) (not to be confused with Queen Elizabeth 1 (1533 -1603) was back in October of last year on the occasion of SCENIC WRITER’S SHACK recording its 100th follower.

This time she’s bestowing her royal congratulation for  SCENIC WRITER’S SHACK notching its 200th follower. And while there’s nothing that can quite beat the feeling of that very first time, may I say that, like tennis ace Roger Federer recording his 20th Grand Slam career title back in January with his victory in the Australian Open Final, it’s a thrill you never tire from.

It seems like only yesterday all the blessed here at Buckingham Palace were gathered around the royal fireplace warming ourselves with the news that SCENIC WRITER’S SHACK (is that how you say it?) had gathered, like goji berries in a blue ribboned basket, 100 dedicated and true followers.

And now to hear you have summoned 200 loyal subjects to your breast is indeed heartening news of the finest virtue. To mark the occasion I have commissioned a special certificate for you which you may place in your   Trophy Room, if you have one of those.

You may have heard that I have plans to retire from official duties sometime in the near future and hand over the  reins of power to my son Prince Charles the Duke of Cornwall.

What you have heard is true and so I say that by the time you reach your next landmark of 300 loyal servants it is very possible that it is he not I who will give regards to your achievement. I would like to take this opportunity therefore, to again personally wish you every success for the future of your little endeavour.

With warmest wishes and kindest felicitations,

Ps. Would it be too bold of me to enquire, should SCENIC WRITER’S SHACK at some point in the future reach the right royal milestone of say.. 500 followers, that you may consider upgrading the name to something a little, how should I put this, classier? Like maybe SCENIC WRITER’S PALACE ?  Just asking…

Ps. For this weeks book recommendation we go retro with a funny 1992 novel by English humorist Sue Townsend (1946 -2014) called THE QUEEN AND I. This book was adapted to become a stage play and the author penned a sequel titled QUEEN CAMILLA in 2006.

When a Republican party wins the General Election in Britain,, their first act in power is to strip the royal family of their assets and titles and send them to live on a housing estate in the Midlands.

Exchanging Buckingham Palace for a two-bedroomed semi in Hell Close (as the locals dub it), caviar for boiled eggs, servants for a social worker named Trish, the Queen and her family learn what it means to be poor among the great unwashed.

But is their breeding sufficient to allow them to rise above their changed circumstance or deep down are they really just like everyone else?

This book should in no way be confused with another title by the same name THE QUEEN AND I by Edward A. Weiss penned in 1979.

Pss. Sticking with the royal theme, the other morning I was awake at 1am sharpening my maths skills by attempting to calculate how many hours sleep I would get if I fell asleep ‘right now’, when, in desperation, I did what any normal person would do when they can’t sleep and switched on the television.

Fortunate enough to somehow avoid the info-commercials for exercise equipement and non-stick fry pans, I lucked upon an episode of a send-up comedy series on Channel 7 called THE WINDSORS which hilariously depicts the royal family.  Funny.  Real funny.

GET A TASTE HERE

Psss. ABBA back at Number 1 on the music charts? Mama Mia!  With news late last month the 70’s supergroup will be releasing their first new music in 35 years sometime during 2018, this is a definite cellphone-vibrating-in-your-pocket announcement  for the entertainment industry.

To those who say it’s comparable to Arnold Schwzenegger making a return to body building or Bill Clinton attempting to re-enter the Senate (or even one-of-a-kind Cher touring again.. no wait… isn’t she coming to Brisbane with a show in September?) I say – you can damage your washing machine if you put in too much washing powder but is that going to stop you from trying to stay clean altogether? As metaphors go that one’s probably up there with a 1970’s homemaker mixing their clothes whites with their washing tie-dyes – something you would never do – but since the group’s first new song is entitled “I STILL HAVE FAITH IN YOU” we’ll all just have to wait and see what comes out, as they say, in the wash.

Pssss. The bonus reads keep on coming and this week is no exception. The good folk at THE BOOK DEPOSITORY have put together a list of  95 OF THE BEST BOOKS OF ALL TIME. (SEE IT HERE) Making it onto the list was Raymond Chandler‘s classic 1953 hard-boiled (as opposed to soft-boiled) detective novel THE LONG GOODBYE. Chandler considered this work his best book and it was made into a film starring one of my favourite actors, Elliot Gould, in 1973. 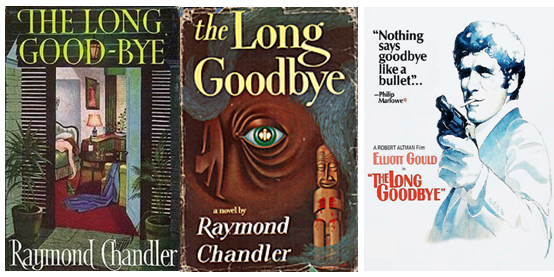 And that concludes this week with what has indeed been another long goodbye from SCENIC WRITER’S SHACK.

6 thoughts on “Letter from Her Maj – Again!”