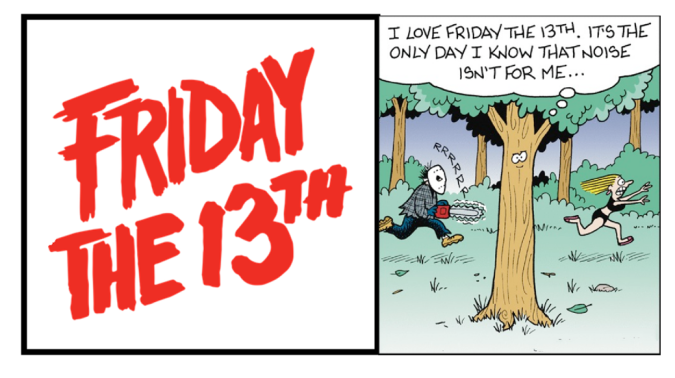 The standard joke about Friday the 13th  is that people would dread it a lot more if it fell on a Monday.

And for people who think their luck generally couldn’t get much worse anyway,  Friday the 13th isn’t going to have them reaching for the over–the–counter / under– the–tongue anti–anxiety spray anymore then they usually would.

Whether you’re superstitious, just a little bit stitious or a solid non-believer in all that not–stepping–on–sidewalk–cracks or walking–under–ladders guff, you’d have to think these days that degree of flapddodle would have far less (if any) a hold over the average punter’s thoughts than compared to say two hundred years ago.

The old superstitions (bad luck comes in threes, cross your fingers, don’t open umbrellas inside a house, stirring your tea or coffee counter-clockwise is bad luck etc.) and the stick-your-head-in-the-sand irrationality they represent thankfully seem to fade with each passing year and exist now only in bad screenplays and first novels.

On another thought, I’m compelled to ask if anyone actually watches any of the FRIDAY THE 13th horror films on Friday the 13th? (They’ve made 12 so far with another due out at the end of this year) That’s pretty similar to asking does any one watch any of the HALLOWEEN movies at Halloween.

Lots of folk watch Christmas movies at Christmas so perhaps its not such a wacky question afterall. These days I’m probably a little embarrassed to admit I still have ten of the FRIDAY THE 13TH films and six of the HALLOWEEN films (they’ve made ten of those) in my polished timber DVD cabinet. There’s no accounting for taste as they say.

The origin of Fridays that land on the 13th of the month being considered unlucky is thought by some scholars to date back to the time of Christ when his crucification is thought to have taken place on a Friday (Good Friday) combined with the fact there were 13 people present at The Last Supper the night before.

It’s quite possible the publication in 1907 of Thomas W. Lawson‘s popular novel Friday, the Thirteenth, contributed in more recent times to spreading the superstition. In the novel, an unscrupulous broker takes advantage of the superstition to create a Wall Street panic on a Friday the 13th.

Am I a person who takes extra care – even a little extra thought – on a day like Friday the 13th?

There was a time in my life when I believed in the idea that life presents the astute observer with ‘signs’ as a guide to the decisions we should make or the path we should choose. These days I believe things happen and then we make up the meaning afterwards.  Most people would label that the pragmatic approach.

One thing I do know is that you can get cheap flights with airlines on a day such as this as many people still try to avoid flying on Friday the 13th if they possibly can.

Is that allowing primitive beliefs from centuries past to dictate your decisions? Probably, but even someone such as myself who considers themselves  immune from such feather-brained and ‘flighty’ thinking might baulk at signing up for the travel deal outlined below.

Ps. Word of the day is… what else but  paraskavedekatriaphobia  (fear of Friday the 13th).

Pss. This hasn’t got much to do with Friday the 13th but if you’re feeling lucky you may as well     CLICK HERE

Psss. This week’s book recommendation is a YA novel published last year by Australian author (born and raised in Townsville) Crystal Sutherland. Despite the title, A SEMI DEFINITIVE LIST OF WORSE NIGHTMARES is a story about the joys (and nightmares) of falling in love for the first time.

Pssss.  Uh-oh! Looks like someone might now be taking themselves a little too seriously… Turns out whoever said writing is like prostitution: first you do it for love, then for a few close friends, and then for money – was a truth sayer of the highest order.

Psssss. This didn’t happen on Friday the 13th but it probably should have. Australian readers will no doubt have heard by now of the road rage incident that occurred in Sydney a few days back involving a chainsaw.

Channelling his best inner Leatherface, an enraged tradie (HERE)  thought he’d do his bit to put Australia at the cutting edge (so to speak) of outrageous behaviour by firing up a chainsaw to up the ante during an altercation in the suburb of Fairfield (Western Sydney) sparked when a car tried to merge in with traffic.

This individual pops the latch on a whole new level of ca-razy and he didn’t even need Friday the 13th to spur him on.